After some inspiring days in Rotterdam and two SuperGlue alpha-testing workshops at Off the press Conference and DEAF Biennale, I feel the need to store some thoughts and ideas in words.

The dominance of services

Web 2.0 promised that everyone could become a media publisher, but had exactly the opposite result: Today, most people’s web content is locked into the proprietary services of only a handful of Internet social media giants.

To understand the needs & requirements that users would have in a self-controlled media publishing environment, it is important to note that for many people the above sentence wouldn’t trigger much more than a “so what?”. Not because they wouldn’t know how Google or Facebook control everything inside, and even outside, their services, but rather because the average user never felt any bad consequences of that control. It’s a bit like explaining people who have lived all their life under the governance of a good king that democracy is on a theoretical level better for them.

I am convinced that if we want to do a good “marketing campaign” for truly user-controlled publishing environments for everyone (not just the “small bunch of critical thinkers”), it is a better strategy to focus on the already existing daily consequences than on what could or would happen if this control was abused at the maximum. The daily consequences are that we adopt and homogenize our behaviour in order to fulfill the “rules” of the environment. And these “rules” go much further than what is allowed due to the terms and conditions of a coorporation like Facebook, Twitter, Google or Yahoo. These rules are found everywhere where a large number of people moves whithin the same “technology grid”. What I am trying to say is that this phenomenon can even be found in open source, self-hosted systems that are large enough to influence the way people publish (ie. WordPress or any large Content Management System).

Despite the fact that we carry out this “adjustment process” ourselves, it is wrong to believe we do that of our own free will. The small mechanisms used to lead us into this behaviour can be carefully designed for a certain purpose. As soon as we understood that, we can start thinking about all the possible consequences and make the connection to a more profound media critique.

The dominance of templates

For me as a designer even more interesting is how the demand for simple services eventually leads to a homogenization of visual appearances and concepts. Whereas there is inarguably a variety of webpage and application designs in the professional sector, more personal contents are often stuck within the narrow grids of current design trends and the respective template systems or services.

The solution seems to be to create even more template engines that allow you to create all that fancy Parallax Scrolling things with Flat Design and Facebook Widgets that all those professional people are using. Even though I use a lot of these engines myself (this is a WordPress blog using the Bootstrap Framework) and I see a reasonable value in them for a fixed number of (mostly professional) purposes, I consider it a problem and a real loss that the early web culture of truly handcrafted webpages is disappearing.

So why is this happening? Well, the first and most obvious reason is that most amateur webpages don’t match mainstream aesthetics. That is surely a problem for some people, but for those there is already a solution in existing and over the years quite sophisticated template toolboxes. A more important reason that is not to be underestimated is the fact that a state-of-the-art responsive & mobile-friendly webpage generated by some toolbox or service is simply more accessible.

So maybe the problem is not that we stick to recent standards and technology, but rather the way we think about templates. For me it all comes down to the question if a template is seen as a preconfigured and predesigned thing that you adjust to your needs or if a template is a personal creation of someone else that you value by reusing it as part of your own creation. Even though the outcome might technically be similar, it is the underlying philosophy that makes a difference. Reusing ideas and creations is an integral part of our society, but that doesn’t automatically imply we have to do that within predefined corporate grids.

Breaking the grid – with SuperGlue

SuperGlue is a project that we (Danja Vasiliev, Michael Zeder and myself) started working on 10 months ago and that will enjoy it’s official release on 3rd October 2014. The idea is on the one hand to design a visual authoring tool that allows you to create and edit websites directly in the browser. The other part is a mini-server that you just plug in your wall. Your pages are then accessed from the “outside world” through your home internet connection. Both parts are open source, you just have to buy one of the supported mini-servers off the shelf and equip it with our software (did I mention that it’s open source?).

On the infrastructure level, you are completely independent of any services. In fact, you don’t even need an internet connection. You can escape the dominance of services and build your own off-the-grid wireless mini-internet. SuperGlue can be used in remote areas without internet access or in places where the internet connection regularly breaks down. You data is not stored somewhere in the “cloud” but right next to you in your living room, on a device that you own and have full control over. 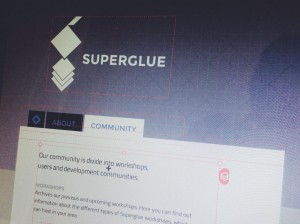 The authoring tool is crafted in a way that every small element in a SuperGlue page can be re-used in any other SuperGlue page. And no, I don’t just mean your own pages: Any SuperGlue page is by design a template that can be remixed by others. Even tiny parts like a button or a menu can serve as a template for your own buttons and menus. Of course you won’t be able to change a page on other peoples servers, but you can edit any page and then hit a “Save As” button to save the page to your own server (including all resources like images etc.). Worried about copyright issues? Well, the web is by design open source. That is not part of a copyright discussion that is a technological circumstance. Anyone could copy and remix any page on a technical level. We only enable everyone, and not just web developers, to make use of it. It is then at your hands to respect and attribute other peoples works.

At the moment, we are refactoring the editing environment in way that it allows you to create many kinds of webpages, from a giant freeform canvas for you elements over dynamic grids to more sophisticated layouts that automatically adopt to certain screen sizes. The focus is thereby on the right mixture between total freedom and narrow template grids, whereas total freedom was at the slightly better position from the very beginning. It is still a long way to go, but what we want to achieve makes every hour of work worth it.

A big thank you goes out to all the workshop participants who helped us test the strengths and weaknesses of SuperGlue! You will soon be able to start crafting your pages, stay tuned at superglue.it!

Impressions from the workshops